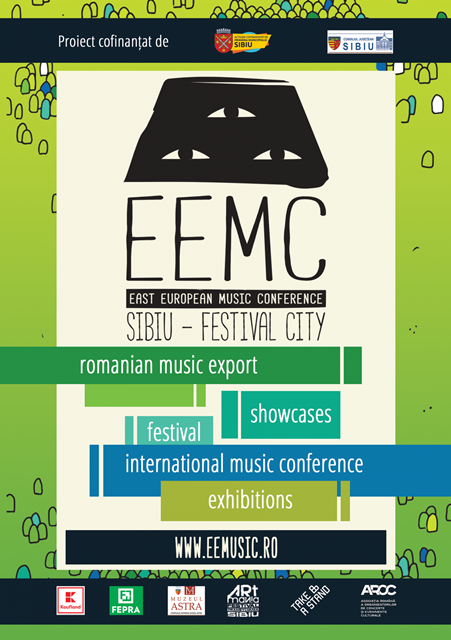 The most important conference dedicated to the musical industry in Romanian is getting ready for its 2018 version, at the Thalia Hall in Sibiu, between July, 26-28. After a first edition when over 400 people – guests and public – from the Romanian and European cultural medium, have exchanged ideas and reached conclusions, and the second edition continues the innovation in the Romanian market of such events with another avantgarde program: Romanian Music Export.

Therefore, the first Romanian program in the entrepreneurial area which takes on the promotion and exporting at a European level, will start with the second edition of EEMC and will be available for all the guests and public of the conference. On July 26, producers, booking agents, promoters and cultural operators in Romania and Europe will take part in a show of five local bands, whose selection will be made after a signing-up on a platform especially designed for this program. Any band in Romania will be able to sign up, the one condition being playing original songs. The selection will be done in two stages, the selection being done first locally, while the final selection of the five bands will be done by an international jury.

“Romanian Music Export is a platform that is missing from the Romanian musical industry. There are many European countries that have such a program, supported by laws and cultural policies, who offer financing, support and recognition to young talents, but who are completely missing in Romania. It is very important to understand that only together, in a coherent and united way, we can open the gate for Romanian musical projects in the international market, it is the right step in an industry that has faced a huge growth in the last couple of years, that has no real policies. We do everything here, in Sibiu, a town that can be called a capital of European cultural avantgarde, said Codruta Vulcu, organizer and founder of EEMC and Romanian Music Export.

East European Music Conference reunites representatives of large European festivals (Mad Cool Festival, Exit Festival, Roskilde Festival among others), producers and managers in the European musical industry, in a unique event in the Romanian space. EEMC is the place where artists, managers, producers and cultural operators in Romania have the opportunity of meeting and starting new collaborations with the special guests present at the conference.

Present on the short nominee list at the European Festival Awards 2017 (Promoter of the Year), EEMC had received, after its first edition, appreciations from a jury formed by the most important people in the European industry, confirming the value and utility of such an even in Romania. Also, on the short list nominees was Codruta Vulcu, for the excellence and passion award handed out each year by the EFA.

“It was huge honour for us such a nominalization, just after the first edition of the conference. The need for such an event was confirmed by the enthusiasm with which the participants and the guests received the talks during the conference, and the European music industry’ s support it so much more valuable as Romania needs more meetings of this kind in order to identify what we are missing to have a competitive industry” , adds Codruta Vulcu, organizer and founder of EEMC and Romanian Music Export.

The conference in Sibiu is organized in partnership with AROC – the Romanian Association of Concerts and Cultural Events Organizers, which includes among its founding members some of the most important promoters in Romania like Emagic, Electric Castle, Summerwell, ARTmania, Blaj aLive or Twin Arts. EEMC is a project supported by Kaufland Romania.

Tickets are already available online on Kompostor for 190 lei for the three days. One ticket grants access to Romanian Music Export Showcase and days 1 & 2 of EEMC. Buying an EEMC tickets offers the possibility of buying an ARTmania Festival ticket at the special price of 110 for the two festival days.

East European Conference takes place the same time as the ARTmania Festival, contributing to the transformation of Sibiu, through art and music in a true European Capital of Culture.

Call for bands: Register your band for Romanian Music Export!

Call for bands: Register your band for Romanian Music Export!